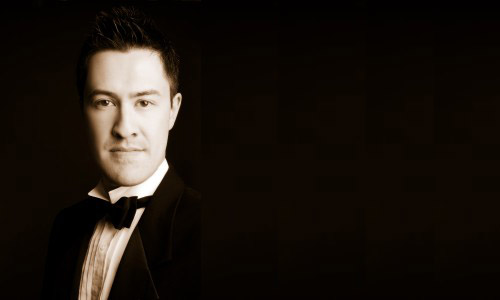 The concert will be opened by music of the composers who almost belonged to one generation and were famous rivals during their lives, too. Beethoven’s Sonata quasi una fantasia No. 1, Op. 27 is a younger sibling of the famous Moonlight Sonata sharing the same opus number. It is in E flat major, similarly to Hummel’s Fantasie Op. 18, one of the most significant works of this Bratislava native, adumbrating the early Romantic style. Both pieces combine the sonata and fantasia form. The programme is supplemented with Bach’s enchanting suite and Liszt’s virtuoso tarantella from the cycle Anées de Pèlerinage, inspired by a fiery Italian dance.
At the prestigious J. S. Bach International Competition in Leipzig Andrew Brownell won the silver (2002), he’s the winner of the J. N. Hummel International Piano Competition in Bratislava (2005), and came second at the Leeds International Piano Competition (2006). Expert critique named him “one of the most significant pianists of his generation” and The Oregonian claims that Brownell “impresses as much with his mind as with his hands…”.